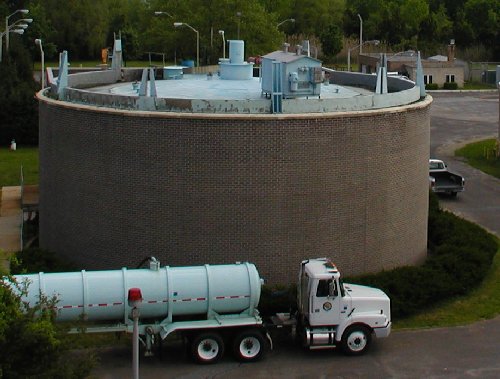 The upgraded Cumberland County Utilities Authority Wastewater Treatment Plant has served as a sewage treatment center for over 100 years.

Just before the turn of the century, in 1898, Bridgeton installed a holding tank close to the river at what is now 333 Water Street. Collection pipes were added to serve the growing Atlantic Street residential community nearby. Prior to this time, cesspools had been the only type of sewage treatment in the city.

In 1927, Bridgeton built its first secondary treatment plant on the site. This consisted of a small pumping station, a primary settling tank called an Imhoff Tank, and a fixed nozzle trickling filter. Solids collected periodically from the tank were put back on nearby farmlands as fertilizer. The system had a capacity of 400,000 gallons per day of waste and serviced the city on the western side of the Cohansey River by gravity flow. In 1930, a collection system and pumping station on the east side of the Cohansey River were constructed to accommodate growing commercial and residential development.

As the city continued to expand, the need for additional treatment facilities became obvious. In 1954, new larger rectangular settling tanks were installed in place of the now outdated Imhoff Tanks. Solids gathered from the new tanks were pumped to a digester and then into a large glass enclosed greenhouse in which the sludge was dried. A secondary settling tank and a chlorine contact tank were also added to improve efficiency and to disinfect treated wastewater before discharge into the Cohansey River.

Up until this time, the sewage system of the City of Bridgeton was designed for domestic use only. As industry increased, the demand exceeded the capacity, especially for specialized treatments. This led to a series of studies which identified the problems and made recommendations to meet new federal standards.

Projections were provided by professional consultants who recommended the building of a new Cohansey Basin facility. Actual construction started in October 1976 and the new plant accepted its first flow in May 1979. By August of that year the full system was in operation at efficiency levels not expected for several more months.

The City of Bridgeton was the largest user of the CCUA Cohansey River Basin plant in 1979 and continues to be so today. However, wastewater generated in Upper Deerfield Township at Seabrook Village, Clement Pappas and Co., Inc., and Seabrook Brothers and Sons has been treated at the plant since 1983. The Township has extended service to the areas of Carlls Corner and Sunset Lake. Hopewell Township began receiving treatment during 1986 in the Route 49 area and Cumberland Manor. Construction began in 1995 to expand service farther into the Township. This expansion continues and includes many residential areas adjacent to Bridgeton. In Fairfield Township treatment is provided to the Federal Prison located on the Fairton-Millville Road and Tip’s Trailer Park. This service started in 1989. Since a large portion of the county relies on septic systems to treat their wastewater, a septage receiving facility was constructed in 1990 to handle this waste stream.

The treatment plant has a capacity of 7 million gallons of sewage per day and is presently treating about 3.5 million gallons. Additional flows can be handled efficiently as the demand for such treatment occurs.